Continuing the challenge posed by my fellow members of the Society for One-Place Studies that we blog about 52 residents of our respective places in as many weeks, here is a profile of Thomas Ferguson, transcribed from Peter Ross and William S. Pelletreau, A History of Long Island From its Earliest Settlement to the Present Time (New York and Chicago: Lewis Publishing Company, 1905), vol. 3, pp. 136-7:

Thomas Ferguson, deceased, for many years a foremost citizen of Brooklyn, known for his success in commercial affairs and for his intelligent enterprise in promoting community interests, as well as for his lovable personal traits of character, was of Scotch ancestry and birth, coming from the same sturdy stock which contributed so largely to the settlement of New York and the contiguous region, and which bore so useful a part in the founding of religious and educational institutions in the new world.

He was born in Scotland in June, 1845. He acquired a broad and liberal education, being predisposed to a ministerial life, a calling from which he turned aside on account of threatened ill health which promised to impair his usefulness as a clergyman. But the moral qualities which had impelled him to look to the ministry were deeply planted and governed his conduct throughout his entire life, and were the inspiration which lay at the bottom of his every act, whether in business or social life.

In 1866, having reached the years of manhood, Mr. Ferguson came to Brooklyn, New York, and became associated in business with his uncle, John F. Phillips, who was extensively engaged in the whiting business in Brooklyn. The firm conducted business with marked success, and was known to the mercantile world as the largest importers of whiting in the country.

During these years, Mr. Ferguson was also busied with important enterprises which were at once profitable to himself and of marked advantage to the community. With characteristic foresight and excellent business judgment, he made early and large investments in Gravesend real estate, and for some years prior to his death he was known as one of the most extensive individual property holders in that beautiful suburb. He was for many years a commissioner of common lands of Coney Island. He was a leader in a few of the most prominent clubs–the Amaranth Club, of which he was president for two years; the Montauk Club, and the Union League Club. His connection with these was, however, only in lines of usefulness; for, while a man of excellent social traits, his great delight was in his home and family.

Mr. Ferguson was married in 1879 to Miss Lizzie C. Gibson, of Philadelphia, Pennsylvania. She was a well educated lady, of cultured tastes, and in hearty accord with her husband in all his concerns, aiding him with her counsel in his many liberal benefactions to charitable institutions and to individuals, and presiding over his home with charming grace. The family residence on Ocean Parkway, one of the most beautiful in all that region, was ever open to their many friends, to whom they dispersed a generous hospitality. 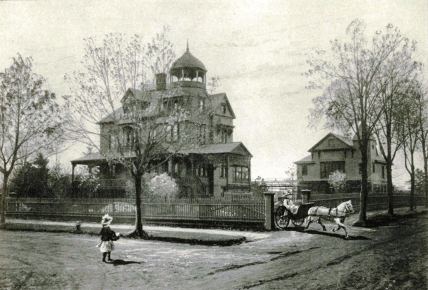 Thomas Ferguson residence as depicted in Jere. Johnson Jr., Building a Nation and Where to Build Ideal American Homes (1891). The Ferguson house stood at 1375 Ocean Parkway near the northeast corner of Avenue N.

This beautiful association was closed by the death of Mr. Ferguson on January 23, 1903. He had not yet completed his fifty-eighth year, and the end came when he was in the fulness of his mental powers, when his usefulness appeared to be of increasing worth to his fellows, and when all happiness and comfort was in his home. The sad event awakened sincere sorrow throughout the community, a sorrow which found expression among all classes. The character of Mr. Ferguson was feelingly depicted by his pastor, who referred to him as a man of sterling worth, physically strong, mentally alert, and morally sound, a sincere Christian gentleman. Those who had been associated with him in business affairs spoke in terms of unstinted praise of his strict integrity, fine sense of honor, and charitableness of disposition in all his relations, whether in business or in social life. He was a man broadly generous in all cases which appealed to him as deserving, but so modest in the bestowment of his beneficences that his good works went unknown except as they were heralded by the recipients of his bounty. And so he left to her who survived him, and to the friends at her side, the fragrance of a memory without blemish, the recollections of a beautiful life.