The number of social clubs that proliferated in Gravesend — and every other small American town for that matter — at the end of the nineteenth century boggles the mind. Every young person belonged to every other young person’s club. Here, Annie Kreyer, daughter of hotel keeper John G. Kreyer, invited friends to an evening’s entertainment at her father’s establishment on the southeast corner of Kings Highway and Coney Island Avenue. 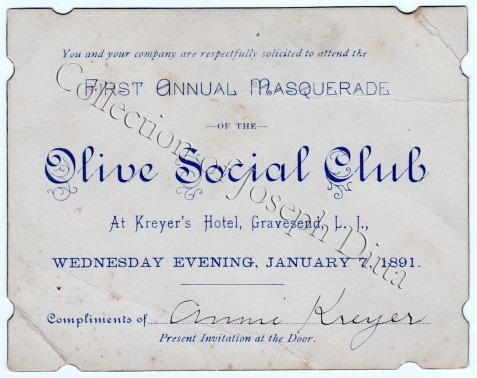 Invitation to the first annual masquerade of the Olive Social Club at Kreyer’s Hotel, Gravesend, January 7, 1891. {Collection of Joseph Ditta}

I’ve not yet found a description of Annie Kreyer’s party, but it probably followed the pattern described by Gertrude Ryder Bennett in her Turning Back the Clock in Gravesend: Background of the Wyckoff-Bennett Homestead (Francestown, New Hampshire: Marshall Jones Company, 1982), 76:

Usually in the autumn, a group of young people appointed a committee which arranged for monthly dances to take place during the winter, and decided in whose homes these would be held. The women supplied the refreshments and the men furnished the music. The hostess tacked unbleached muslin over her ingrain carpets to make dancing easier and to preserve the original floor covering from the lively heels of her guests. How they enjoyed the Saratoga lancers, schottisch, Virginia reel, quadrille and the polka! Of course the waltz, with its romantic appeal, bid high for popularity. / . . . / Everyone liked games as well as dancing. “Throw the handkerchief,” “Going to Jerusalem” [better known as musical chairs], “Charades” and those “slightly naughty” ones which offered the opportunity to hold hands. During an evening the guests clustered around the piano or organ singing popular songs like “Asleep in the Deep,” “Alice, Where Art Thou?” and “Love Me and the World Is Mine,” interspersed with patriotic music and hymns.