That Time Lady Moody’s House Was In a Movie

It absolutely floored me. It was Sunday, seven years ago. Or maybe eight. I lay slumped on the sofa thumbing a book. TCM murmured on the television. I dozed more than I read, and only half-eyed the screen. Whichever classic film was on had ended, and some black-and-white short followed it to fill the hour. I yawned and counted the pages left to go. Suddenly, a tenor, warbling the sappiest ballad I’d ever heard — words about truth or love or hearts or death above a trembling piano — snapped me awake. I often wonder what made me focus when I did. Thinking back, it could only have been the ghosts of Gravesend whispering “Look up. Look up, and see.” Behind the singer pictures flashed, still images of bathers in the surf, drinkers in a bar. They looked like magic lantern slides, those photographs on glass that Victorians projected on parlor walls. And this is the one that floored me: 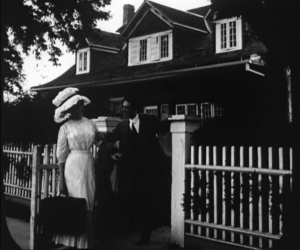 The image glowed for all of four seconds before the next slide popped up. By the time I realized what I’d seen it was gone. But through the magic of DVR I rewound the film and paused on the image. There was no doubt: it was Lady Moody’s House, the building still standing at 27 Gravesend Neck Road (currently for sale and due for designation review by the New York City Landmarks Preservation Commission on October 8, 2015). What the heck was it doing in this movie?

I started the film from the beginning and learned it was “The Nickelette,” a 1932 Warner Bros. production poking fun at the early movie-going experience of the nickelodeon: “When movies were silent and money talked, a nickel bought an evening’s entertainment. Let’s enter one of these ancient nickelettes.” Eddy Gilligan, the “silver tone tenor,” belts out the melodramatic 1913 hit, “The Curse of an Aching Heart” (music by Al Piantadosi; lyrics by Henry Fink), to underscore fifteen appropriately old-fashioned, if unrelated, pictures. The Moody House slide comes twelfth.

At the time, I managed to find the film online. I saved it and shared it with some fellow Gravesend fanatics (we’re a small but noble group). But then I put it out of mind. That was several computer crashes ago. I lost the file and the emails in which I had shared it. (I since back up regularly to that white, puffy cloud.) I even forgot the title of the film.

Recently I recalled one of the people with whom I shared the news and he had, incredibly, preserved my message. The link to the online version of the film is defunct, but now it is available on DVD, part of a six-disc set in the Warner Bros. Archive Collection called Vitaphone Cavalcade of Musical Comedy Shorts. I bought it, naturally, and captured the screen shot seen here (for which I pray the Warner Bros. honchos won’t sue me!).

P.S. 95 does not appear to the left of the house; it was constructed in 1914-15, so the image had to have been made earlier. Still, it must date from after 1905, by when William and Isabelle Platt, owners of the house, had added dormer windows to the second floor. Compare the screen capture with a positively identified view of the building in the collection of the Brooklyn Historical Society, taken at a slightly later date, and you’ll agree it’s the same house: 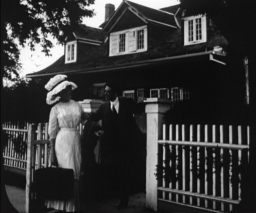 Screen capture from the 1932 Warner Bros. production, “The Nickelette.” This image of the Lady Moody House at 27 Gravesend Neck Road was taken between 1905 and 1914.

This lantern slide of the Hicks-Platt House (a.k.a. Lady Moody’s House) is dated circa 1905, but it must be later, since P.S. 95, constructed in 1914-15, looms to the left. {Collection of the Brooklyn Historical Society.}

But the question remains: How did this picture of Lady Moody’s House wind up in a movie? I have a theory. One of the early twentieth-century occupants of the house was an actress, Carlota Cole — sometimes spelled “Carlotta,” and sometimes known by her stage name, “Charlotte Townsend” — who lived there with her brother, Bert, between 1912 and the early 1920s. (Bert M. Cole bought the house from the Platts.) As this write-up from the Brooklyn Eagle attests, Carlota enjoyed some popularity, and even worked with John Drew Jr. (1853 – 1927), uncle to John, Ethel and Lionel Barrymore (hence Drew Barrymore’s name): 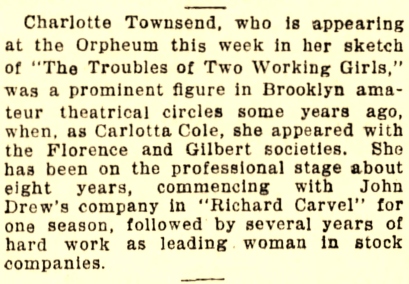 I haven’t found evidence of it yet, but it is entirely possible that Carlota also worked for Vitagraph Studios, the pioneering movie company founded in Brooklyn in 1897. The Vitagraph lot was in South Greenfield, a forgotten neighborhood in the vicinity of Avenue M and the Brighton Line (today’s B/Q subway). In her history of the Wyckoff-Bennett Homestead, Living in a Landmark (Francestown, N.H., 1980, p. 116), Gertrude Ryder Bennett recalled how the “dunes, beaches, woodlands, quiet lanes and country homes” of southern Brooklyn served as locations for Vitagraph films:

One year, the company built the fronts of several houses on the shore of Gerritsen’s mill pond. Time disintegrated them[,] but while they stood, the people in our neighborhood walked there with box cameras after the actors had finished work, and posed in doorways pretending to be popular movie stars. . . . Around these little false-front shacks the mill pond made an exquisite wilderness background with its great willow trees close to the water’s edge and miles of meadow land stretching beyond the pond. Today that site, filled in, is the baseball field of Marine Park on the north side of Avenue U surrounded by an urban community.

Vitagraph even shot a scene on the porch of the Wyckoff-Bennett Homestead (Gertrude believed it was from The Prisoner of Zenda). Isn’t it possible that they also used the Lady Moody House as a backdrop for some other project? Warner Bros. bought the Vitagraph Company in 1925. Could this lantern slide have been among the stock? A leftover promotional still from some forgotten flicker? And just the sort of nostalgic image needed for making “The Nickelette?”

Carlota Cole does not appear in the “Vitagraph Family” list of actors in Anthony Slide’s The Big V: A History of the Vitagraph Company (Metuchen, N.J.: The Scarecrow Press, Inc., revised edition, 1987), so maybe that isn’t her, dressed in white, on the arm of her beau at the picket fence. But these are clearly actors, posed, perhaps, as newlyweds about to cross the threshold. (Or maybe he’s trying to stop her departure?) And it is unmistakably the house. In any case, isn’t it wonderful that I looked up when I did to catch it? Who else would have noticed?