Happy New Year! In response to a challenge posed by my fellow members of the Society for One-Place Studies that we blog about 52 residents of our respective places in as many weeks, I will attempt to profile some of Gravesend’s many historical “characters” by posting images and biographical excerpts here. While they might seem old hat to me, they just might be new to Gravesend’s voracious reading public. Whether or not I manage to put up something new each week remains to be seen, but consider this a start.

The Eagle and Brooklyn: The Record of the Progress of the Brooklyn Daily Eagle Issued in Commemoration of its Semi-Centennial and Occupancy of its New Building; Together With the History of the City of Brooklyn From its Settlement to the Present Time, edited by Henry W. B. Howard (Brooklyn, N.Y.: The Brooklyn Daily Eagle, 1893), vol. 2,1147-1148: 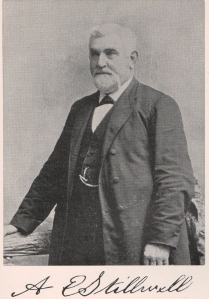 The Stillwell family is an honored one in Gravesend, where some of its members have resided ever since the first settlement of the town; and all of them in some manner or other, have been identified with the progress and well-being of the place. ABRAHAM EMMENS STILLWELL is a lineal descendant, on his father’s side, of Nicholas Stillwell, an Englishman who came from Hull, by way of Leyden, somewhere about the year 1638, and settled on Manhattan Island. He remained there for some years; but finally removed to Staten Island, where he died in 1671. Mr. Stillwell’s mother was an Emmens, her grandfather being a Dutch preacher named Schoonmaker. Abraham E. Stillwell was born in Gravesend, on August 22, 1832, and attended the public school in his native village until he reached the age of fourteen years. Subsequently he was a pupil for three years at Flatbush Hall Academy. Leaving school, he made an attempt to make a living by teaching in Boston, Mass., but soon returned to Gravesend and worked for a few years on his father’s farm. With the exception of a brief interval, he attended strictly to the pursuit of agriculture until 1864. In that year he started in the second-hand and commission business on Grand street, Brooklyn, and subsequently engaged in the second-hand lumber business, on Thirty-eighth street, New York. This venture did not prove successful and once more he returned to Gravesend. he was appointed sexton of the town graveyard, and incidentally with his duties united the business of an undertaker. In 1860 he built the house where he now resides. Mr. Stillwell has been twice married, first in 1859 and again in 1887. The present Mrs. Stillwell occupies a prominent position in Gravesend society. For twenty-five years or more Mr. Stillwell has been a member of Franklin Lodge of Odd Fellows, an he also belongs to the Sheepshead Bay fire department and the John Y. McKane Association; he is now a Democrat, though formerly prominent in Republican circles.