On October 8, 2015, the New York City Landmarks Preservation Commission (LPC) will hold a public hearing to determine if the house at 27 Gravesend Neck Road — known as Lady Moody’s House — meets the criteria for landmark status. Despite what many locals believe, the house is not an official landmark. That means it is not protected by law, and could, conceivably, be torn down by some uncaring developer. (If you’d like to be its guardian, the house is currently for sale!) However, the house has been on the LPC’s radar since 1966, when it was “calendared.” That provides a modicum of protection in that any application for demolition should send up a red flag, spurring the LPC to action. But they’ve had half a century to decide. After the October hearing, a public meeting in early 2016 will determine the next step, which — fingers crossed — will hopefully lead to designation of this most iconic of Gravesend houses.

What follows is my open letter to Meenakshi Srinivasan, chair of the New York City Landmarks Preservation Commission, urging her to act now. I beg you all to drop a line, however brief, to the LPC, by the October 1st deadline (whether or not you plan to attend the hearing), stating your support for the house. The more of us they hear from, the better. Take a look at the LPC’s informative fact sheet about the house (even I learned some things!), then write to backlog95@lpc.nyc.gov. I’d love to read your thoughts if you’d care to copy me (webmaster@gravesendgazette.com).

Oh, and don’t miss the gallery of wonderful images at the bottom of this post! 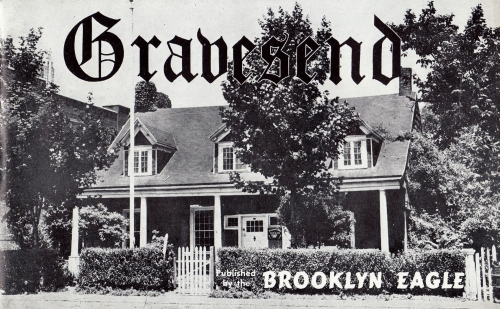 The Brooklyn Eagle featured the Lady Moody – Van Sicklen House on the cover of its 1947 booklet of Gravesend history.

Ask anyone in Gravesend, Brooklyn where Lady Moody lived. Invariably they’ll point to the house at 27 Gravesend Neck Road, just next to Public School 95. How do they know she lived there? A teacher told them. Or their grandmother. And who was Lady Moody anyway? Oh, she helped George Washington escape the Redcoats through a tunnel running from her basement to the cemetery across the street. And during the Civil War she hid slaves in that tunnel on their way north to freedom.

None of this happened, of course: Deborah Moody died late in 1658, nearly seventy-five years before the birth of Washington, and over two centuries before the Civil War. The general public, knowing instinctively that Lady Moody bore some significance, but lacking specifics, attaches her — and the house at 27 Gravesend Neck Road — to the seminal events of American history.

The facts are these: Deborah Moody (ca. 1586-1658) was the wealthy, freethinking widow of a baronet. By 1639 she was in Puritan Massachusetts, where her Anabaptist leanings branded her “a dangerous woman.” To avoid censure she moved in 1643 to New Netherland, where she petitioned the tolerant Dutch to grant her and some followers a spot on western Long Island where they could worship as they pleased. They called their settlement Gravesend, the patent to which ensured they could enjoy “liberty of Conscience . . . without molestation or disturbance from any magistrate or . . . ecclesiastical minister that may pretend jurisdiction over them.”

Lady Moody must have built a house on her property between 1646 and 1658. Is the house standing there today the one she occupied? A structural evaluation conducted in 2005 by Robert Silman Associates, Consulting Engineers, suggests the present building incorporates three phases of construction: The part most visible — Phase 2 — is an eighteenth-century “random rubble [stone] building supporting hand-hewn wood floor beams and simple log beam roof trusses.” Phase 3 reflects the early twentieth-century changes made by then-owners William and Isabelle Platt, who excavated a full basement under the ground floor, added dormers to the roof, and stuccoed the exterior to conform with the prevailing Arts and Crafts aesthetic. But evidence of an earlier structure, one possibly dating from the seventeenth century, is visible in the basement, where there are four stone bearing walls, three of which support the current above-ground walls. The fourth lies buried beneath the main house and its rear extension. This “out-of-place” wall led Silman Associates to hypothesize that the Phase 2 house is a reconfiguration of an older building, a Phase 1 house that was enlarged in the 1700s.

This watercolor by Charles W. Bauhan  — “Wash-day. Gravesend L. I. Sep. 4 / [18]93.” — was painted looking east from a spot now in the schoolyard of P.S. 95. It captures the west gable end of the Lady Moody – Van Sicklen House rising above the fence. {Collection of Joseph Ditta}

Was this Phase 1 house Lady Moody’s? Or was it built by one of the later seventeenth-century owners of her land? We may never know. But its expanded  form — the rubble-stone Phase 2 house — is probably the work of the Van Sicklen family, who came into possession of the property in 1702. Most eighteenth-century houses in sandy, coastal Gravesend were of wood-frame construction. Stone houses tended to be built near ridges, where appropriate-sized boulders were plentiful. To build a stone house at a location where rubble was scarce required significant manual labor, and the Van Sicklens, who, like most Dutch farmers of the period owned slaves, likely employed those slaves to transport rock to the site.

The Van Sicklen family occupied the house for the rest of the eighteenth century and through most of the nineteenth. Eventually it descended to Cornelia Van Sicklen, whose husband, Thomas Hicks, acquired it in 1842. (His carved initials survive on a ceiling beam near the eastern ground-floor fireplace of the house.) Hicks died in 1884, and his wife followed in 1893. The house sat vacant for a time, and then served briefly as meeting place for the fledgling Gravesend Methodist Episcopal Church in 1899. In 1904 the Hicks estate sold the house to William and Isabelle Platt, whose renovations resulted in a romanticized Dutch farmhouse set in a lush garden, which Mrs. Platt profiled in the June 1909 issue of Country Life in America. The Platts were the first to call this the “Lady Moody Homestead,” a name it has kept for more than a century.

By 1910 the Platts put the house up for sale (William Platt was a real estate speculator who was then involved in developments on Staten Island), and so began the perennial cries from preservationists and press that the Lady Moody House be rescued by the City or a civic group, or moved to Prospect Park or even to the grounds of the 1939 World’s Fair. Its fate seemed secure after it became a V.F.W. post in 1945, but that was a short-lived incarnation. The house reverted to private status, and was bought in 1955 by Nunzio Maisano, who covered the front in imitation stone veneer. Ironically, this facing hides the real thing. (It wouldn’t be too difficult to restore the house to the attractive state in which the Platts left it; the original door, removed by Maisano, survives in care of Eric J. Ierardi, president of the Gravesend Historical Society.)

Nunzio Maisano’s descendants held the house for nearly fifty years before selling it. Now it is on the market again, and time is running out. (Couldn’t the City acquire the house as a gift to the neighboring school for use as a meeting place or exhibition space? Both the Historic Districts Council and the New York Landmarks Conservancy have expressed interest in the house. Why not tap them for assistance and grants?)

The Landmarks Preservation Commission calendared the property in 1966, but a hearing that year did not result in designation. Nor did subsequent hearings in 1970 or 2004, due to owner opposition. But the Commission has designated other sites when faced with similar resistance (e.g., the Hendrick I. Lott House at 1940 East 36th Street in Brooklyn), and in cases where the fabric of a structure has been significantly altered (e.g., the asphalt-shingled Sandy Ground cottages at 565 and 569 Bloomingdale Road on Staten Island). And the recent designation of the Stonewall Inn, birthplace of the modern LGBT movement at 51-53 Christopher Street in Manhattan, illustrates that the Commission is cognizant of the historical associations of a building, even when its architectural integrity has been compromised.

Despite the changes it has weathered, the Lady Moody – Van Sicklen House remains the sole surviving eighteenth-century stone farmhouse in Brooklyn. It is one of two extant Dutch-American houses within the boundaries of the original Gravesend town square, where as late as the 1920s there were seven. It sits directly opposite the landmarked Van Sicklen Family Cemetery, which holds the remains of many generations who occupied the house. At the very least, it stands on the property of the remarkable Lady Deborah Moody, the first European woman to found a community in North America, a settlement chartered on the principle of religious freedom some hundred and thirty years before the signing of the Declaration of Independence. I trust you will seize this opportunity to recognize publicly, formally, and legally, the significance of this site tied inextricably to the themes of Brooklyn history, Women’s history, American slavery, and religious freedom. Without landmark protection the house is doomed.

Thank you for your valuable time.

Map of the Gravesend village square showing in red the house lot allocated to Lady Moody in 1646.

Map of the Gravesend village square showing in red the location of Lady Moody’s house lot in 1907.

This 1893 view of its west gable end is possibly the oldest known photograph of the Lady Moody – Van Sicklen House. {Collection of Joseph Ditta}

1903 photograph of the main facade by George W. Nash, taken just prior to Platt renovations. {Collection of the New-York Historical Society} 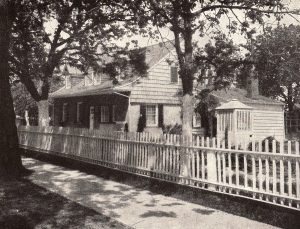 1927 photograph showing main facade prior to the addition of columns.

The Lady Moody – Van Sicklen House as it appears today.