The south side of Avenue U between West 10th and 11th Streets, Brooklyn, as it looked in September 2014. Courtesy of Google Street View {https://goo.gl/maps/WpjKgMNrHMA2}.

To many Gravesenders the phrase “on the avenue” — as in “I saw him on the avenue” or “she went shopping on the avenue” — refers to one avenue in particular: the neighborhood’s main drag, Avenue U. In proper Brooklyn parlance the word “avenue” is pronounced “aven-yoo,” not “aven-oo.” That should make “Avenue U” come out as “Aven-yoo Yoo,” but it doesn’t. Instead it’s pronounced “Aven-uh Yoo.” Don’t ask why. (Some snoots do say “Aven-oo You,” but they’re too fancy for me.)

My ancestral stretch of “the Avenue” is the south side of Avenue U between West 10th and West 11th Streets. Except for two houses at the corner of West 10th Street (80 and 82 Avenue U), the rest of the block is taken up by an attached row of eight three-story brick apartment buildings–nos. 62-78–designed in the vaguely Tudor style that was popular in Brooklyn in the mid-1920s. Each building has five apartments: two each on the upper stories (front and rear) and one on the ground floor, behind the storefront. The front apartments have four rooms (living room, kitchen, and two bedrooms) and the rear apartments have three (living room, kitchen, and bedroom). Except for the corner building (no. 62), which is three windows wide on Avenue U, all the rest are four windows wide. And the corner building’s apartments are entered from 2101 West 11th Street; the other buildings have alternating pairs of side-by-side entries on Avenue U. 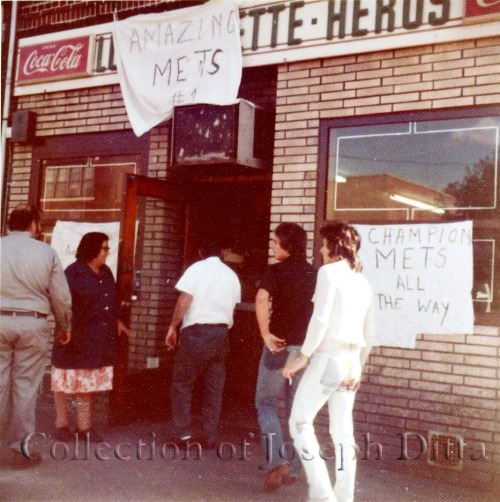 Outside Tony’s Luncheonette at 62 Avenue U, when the Mets won the pennant, 1969.

For decades the block was anchored by two establishments: Tony’s Luncheonette, at 62 Avenue U, on the corner of West 11th, was once called the Mayflower Luncheonette, or something like that. (If it ever had a sign with that name, it was long gone by my time.) Tony was Anthony Salerno, known to the neighborhood as “Tony-the-Mutt” because of his terrible betting record. Losing streak aside, he flipped the tastiest greasy-spoon burgers in the world. But I digress.

The other store, the Varacalli grocery, was run by three generations of that family at 70 Avenue U. It was the archetypal no-frills place that stocked everything under the sun. You could buy toilet paper there in any color you liked so long as it was white. 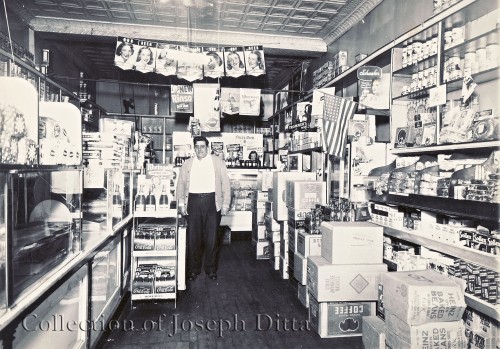 Armand Varacalli in his grocery store at 70 Avenue U, around 1949

My maternal grandparents and their three children occupied the third floor rear apartment at 66 Avenue U. My mother’s older sister married into the Varacalli family next door, at no. 70 (for some quirky reason, the addresses skip from 66 to 70; there is no 68 Avenue U). My aunt still owns that building, and although she now spends most of her time on Staten Island, she holds the title of longest resident of the block, somewhere in the ballpark of seventy-five years.*

My grandparents moved to West 8th Street in the mid-1960s and stayed there until about 1979, when they moved back to 66 Avenue U–this time to the ground floor apartment. My grandmother remained there until her death in 1995. That year, my mother’s brother, feeling nostalgic, commissioned our cousin, the innately talented, self-taught artist Matt Fontana (born 1940), to create an idealized picture of “the Avenue” (below).

Matt worked from memory and from photographs (compare the snapshot of Tony’s Luncheonette, above, with his rendition of the storefront). He compressed the view a bit, and moved some things (the mailbox, for instance, was really across West 11th Street), but artists have license to do that. All the people are real–the woman seated is my grandmother; next to her sits Joe “Bucko” Varacalli; the guy in the gym shirt is my cousin; the woman entering the door is my mother’s sister; and that’s me, supposedly, sitting profile near the door. The lady leaning out the window is my grandfather’s aunt, Angie Marrano. She actually lived one floor higher in a different building (there’s that artistic license again), and would send down money in a basket on a string for us to pin on St. Anthony when the procession went by. Then she’d haul up the prayer card we got for her dollar. 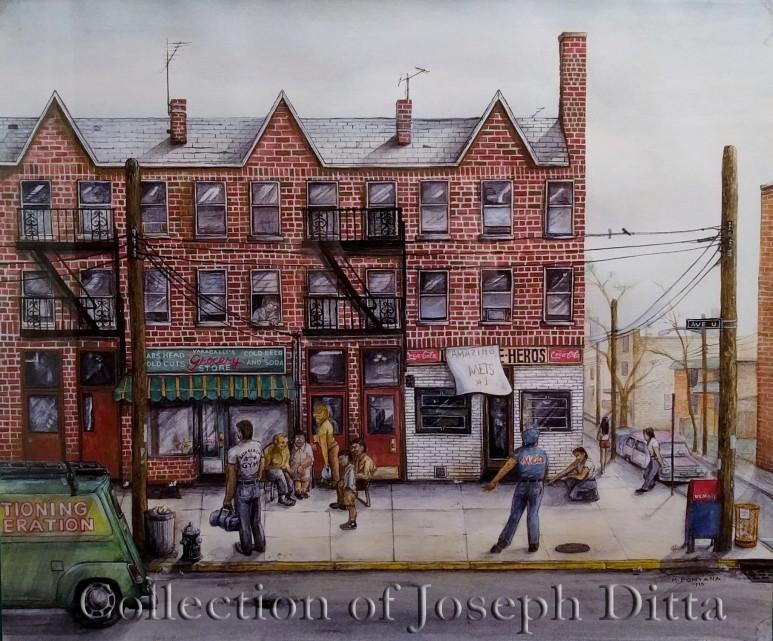 Pastel fantasy of Avenue U at the southeast corner of West 11th Street by Matt Fontana (b. 1940).

My uncle surprised me last Thanksgiving with this priceless picture. I never lived on “the Avenue,” I only “hung out” there, but when I stare at this scene the stories I’ve heard a thousand times swirl in my brain. Like the one about Signora Ernesta, the hundred-year-old lady (give or take). Or Chubby, the dog who terrified everyone. Or Chubby’s master, Ida, who forced my anemic mother to eat spinach sandwiches. Or the time Tony-the-Mutt served Angie Marrano a cherry-topped sundae that was largely shaving cream. But I digress. Again. Sue me.

*UPDATE: My aunt Jay died today, Saturday 1 July 2017, aged eighty, taking with her the title of Queen of the Block. R.I.P.

Filed under Avenue U

2 responses to “On the Avenue”