You might say I’m a sucker for a cyanotype. If you don’t know that word, it’s pronounced “sigh-AN-o-type,” with the accent on the “AN.” Cyan is really just a fancy name for greenish-blue. A cyanotype is a photograph printed using the same process for blueprints, those white-line architectural drawings on blue paper. But I don’t really care about the science involved. I just love them because cyanotype photographs are hauntingly beautiful. Sad, even. Or maybe that’s just me giving too much weight to their melancholy blueness. Take a look at these Gravesend beauties and you decide. The first three were taken by the artist Charles William Bauhan (1861-1938), or, possibly, his wife, Agda (also an artist), who lived in Gravesend, briefly, during the summer of 1893.

“Summer 1893 at Gravesend L.I.” The Bauhans rented rooms in this Dutch farmhouse from Homer Wiltse (that’s him, leaning on the gate). It stood on the north side of Gravesend Neck Road just east of P.S. 95, and was demolished around 1930 when the schoolyard was expanded.

“1893 | View looking east from window of above house. This house is said to be between 200 & 300 years old.” This is the so-called “Lady Moody House” at 27 Gravesend Neck Road. When the Bauhans lived next door, the Moody House was not quite 200 hundred years old; today it is in the ballpark of 300 and finally an official New York City landmark. The tower just beyond belonged to the Gravesend Reformed Dutch Church on McDonald Avenue, dedicated in 1834 and demolished late in 1893, not long after this photograph was taken. 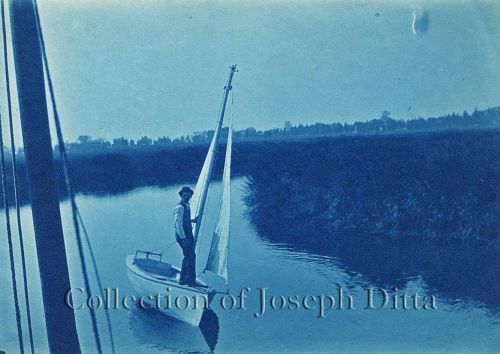 “Coney I. Creek. | Gravesend | 1893.” That is probably Charles William Bauhan sailing on Coney Island Creek. He painted a small watercolor of the rear of the Coney Island Elephant (see the building below) from that vantage point on June 18, 1893, so perhaps this cyanotype was snapped the same day, possibly by his wife, Agda. 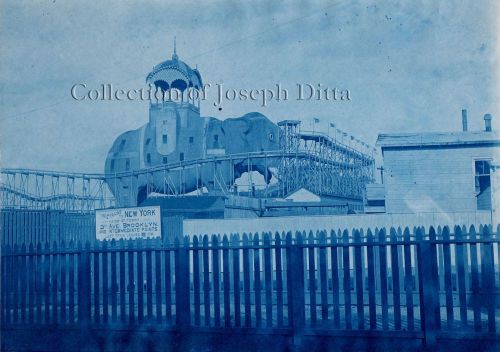 “West End at Coney Island.” This, my favorite cyanotype of all, shows Elephantine Colossus on Coney Island, near the intersection of Surf Avenue and West 12th Street. The Shaw Channel Chute went up around the Elephant in 1889, and both burned to the ground on September 27, 1896. This image probably captures the forlorn structures in their final years.

May your holidays be warm and bright! –Joseph

[I am sorry for the obnoxious watermarks, but these are unique images, and I’d rather not have them copied without attribution.]