School’s Out For the Summer! 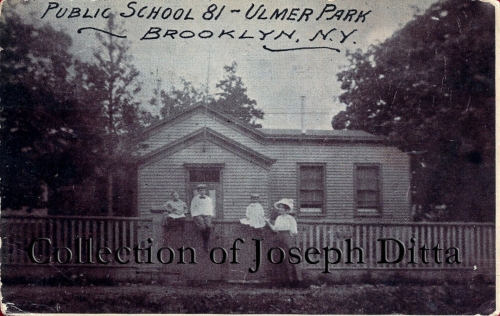 The Town of Gravesend’s School District No. 3 was established 25 October 1870 to serve pupils in the village of Unionville, the waterfront settlement on Gravesend Bay later called Gravesend Beach or Ulmer Park, and now absorbed by Bath Beach. The schoolhouse on the postcard above went up shortly after, at what would become the corner of Cropsey Avenue and Bay 41st Street, the approximate site of 2550 Cropsey Avenue. When new it stood in a cedar grove. Inside it must have resembled another primitive schoolhouse in Gravesend, where Nellie May (Ryder) Bennett (1873-1951) recalled how “cold air blew up out of the wide cracks of the plank floor and, in bitter weather, [how] she would sit on one foot at a time, spreading out her woolen skirt, in an effort to keep warm.” A central stove threw heat on the students seated closest to it but barely radiated to the classroom’s far corners. Bennett remembered one sneaky boy who tossed Limburger cheese on the coals. Early recess, anyone? 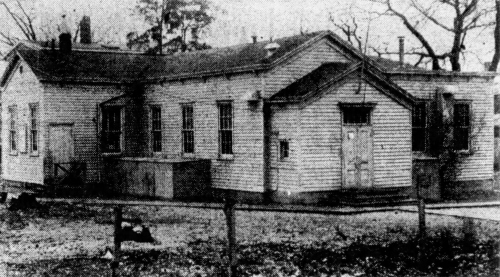 “Antiquated and in the way of waterfront highway improvements, the old P.S. 81 building near Gravesend Bay soon is to be demolished.” Brooklyn Times Union, Sunday 2 February 1930.

In time District School No. 3 came to be called P.S. 81. The little wooden schoolhouse stood until early 1930 when the widening of Cropsey Avenue forced its demolition. It might have survived had it been moved back 15 or 20 feet, as a plan suggested, but by then the sixty-year-old structure had been surpassed by larger, modern, brick–and fireproof–schools erected in the neighborhood.

Incidentally, until last week I never knew this postcard of P.S. 81 existed. I almost didn’t bid for it, thinking its caption must be a printing error of the type sometimes encountered on old cards. But the newspaper image above, from the Brooklyn Times Union, definitely shows the same building, thus confirming that the postcard depicts what it claims to!

[Nellie May (Ryder) Bennett’s memories are recorded by her daughter, Gertrude Ryder Bennett, in her book Turning Back the Clock in Gravesend: Background of the Wyckoff-Bennett Homestead (Francestown, N.H.: Marshall Jones Company, 1982).]

2 responses to “School’s Out For the Summer!”