How did we survive without buzzing smartphones to warn us of coming thunderstorms? We waited for the rain to pass to run outside through the puddles! That’s just what this Brooklyn family did in September 1934, after a thirty-hour downpour left a lake outside 2403 East 13th Street, at the southeast corner of Avenue X. Their house, like others in the vicinity, dated from the 19th century. It bordered the valley of Squan Creek, a narrow tributary of Coney Island Creek that originated near Avenue W and East 11th Street and snaked its way south. Although the waterway had been largely filled in by the time this newspaper photo was taken, the unevenness of the surrounding terrain trapped storm runoff and residents alike–unless they were willing to “wade” it out. 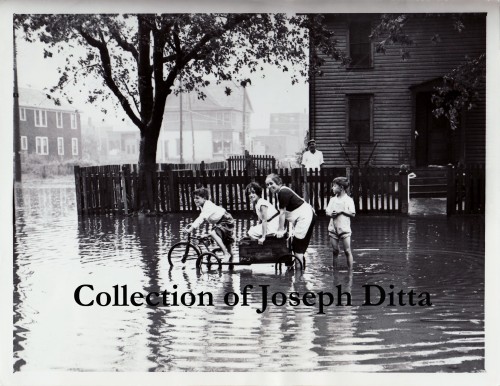 “IT RAINED IN BROOKLYN. Brooklyn, N.Y. . . . Officially, only 1.48 inches of rain fell on Brooklyn, N.Y., during the precipitation of the past thirty hours, but, in spots, it seemed that the amount was many times that. Here is a scene on Avenue X, at East 13th Street, which gives an idea of the flood conditions faced by residents of that neighborhood.” 9-18-34.

5 responses to “Flash Flood Past”